THEY’RE FLYING OFF THE SHELVES!

This little piece of Cairn propaganda originated from a chance observation from Martin our Chairman as he wandered through our dispatch area the other day.  We normally keep a close watch on him, but our surveillance isn’t always up to scratch, in consequence of which he noticed three identical copies of the strange-looking equipment that you can see here.  “Wow, these things are flying off the shelves!” he exclaimed, as he was hurriedly led away.  Worse still, previous security breaches meant that he even knew what they were for, so the title of this post reflects his annoying penchant for truly dreadful puns.  It may not look so obvious, but they are in fact for studying … the behaviour of flies!

Clearly a certain amount of explanation is in order, and for which this paper from the Jayaraman group at Janelia Farm provides the detailed background.  Several years ago, Mikko Juusola, now at the University of Sheffield, wanted a similar instrument for his own research.  We hadn’t exactly expected this admittedly very “fun” piece of equipment to become one of Cairn’s major product lines, but we were sufficiently fascinated for Tom to be tempted to take it on as a spare time project, so he created a couple of nicely engineered replicas a few years ago.  And now, suddenly Mikko and his colleague Andrew Lin have asked for three more! But what exactly IS this instrument, and perhaps more importantly, where does the fly fit into this amazing contraption?

Its genome has been sequenced to death and beyond, but the question of how all those genes work together to create a functional fly is likely to occupy many researchers for many years to come!

The fly in question is the fruit fly, Drosophila melanogaster, the importance of the study of which has certainly been better appreciated by some rather than others .  Its genome has been sequenced to death and beyond, but the question of how all those genes work together to create a functional fly is likely to occupy many researchers for many years to come!  In this instrument the fly is actually walking rather than flying, as it is harnessed from above by section 1 of the CAD diagram that we show here.  Section 2 provides support from below for a small ball, suspended on an air jet, over which the fly walks, and section 3  supports three cameras, one of which is for viewing the fly, and the other two view the ball so that its motion can be recorded as the unsuspecting dipteran walks around on it. 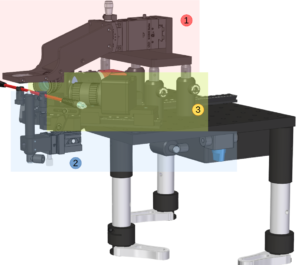 The fly’s movements are in response to visual stimuli from an array of LEDs placed in front of it.  That isn’t something we provided, but we are nevertheless assured that whatever is projected there is the arthropodal equivalent of wholesome family entertainment.  Perhaps less wholesome is that at least in the original study, the fly had had its brain exposed to allow two-photon imaging of neuronal fluorescence signals from a genetically encoded calcium sensor while it was walking around, so this is all very clever stuff.  Cairn’s contribution has merely been to replicate the instrument’s functionality, but clearly Tom must have done a pretty good job for Mikko’s group to come back for several more, and presumably the flies must have been performing pretty well too.  But now we’re keeping a much closer eye on Martin, in case he starts asking too many questions about some of the other cool things that have been going on here during these admittedly very strange recent times!