All organisms are exposed to a whole manner of different sensory stimuli in their surrounding environment at any given moment. How this information is assimilated and subsequently interpreted by the organism to generate an appropriate response, whether it be identifying that a food is safe to eat or escaping from a predator, is a fundamental question of biological research and one that requires a multidisciplinary approach to answer it.

The research group of Professor Mikko Juusola (University of Sheffield, UK) studies the visual system of the fruit fly Drosophila melanogaster. One of their goals is to understand exactly what visual stimuli the fly is responding to in its surrounding environment and how this information is then processed by networks of neurons in the brain to initiate a behavioural response. This is a complex problem to solve, requiring expertise in disciplines ranging from molecular biology and neurobiology to computational mathematics and advanced microscopy. To help achieve their goals, the Juusola group contacted Cairn Research back in 2014 to discuss modifying a multiphoton microscope for the purpose of studying the brain activity of a living fly in real time and in response to various visual stimuli, whilst simultaneously being able to monitor its walking behaviour.

Being able to observe and link neuronal activity to behaviour in a moving animal is technically very challenging. Based upon the work of Dr Vivek Jayaraman (HHMI Janelia Research Campus, USA)[1], the Cairn Research Custom Microscopy Design team built a customised optomechanical assembly to fit the Juusola group’s multiphoton microscope. Here the head of the fruit fly is fixed, and its brain exposed, whilst the legs of the fly are able to move freely on a floating, rotating ball. This regime is referred to as ‘tethered walking.’ The ball (also called a ‘trackball’) is illuminated with infrared light and its motion, in response to the movements of the fly’s legs, is recorded by two cameras that form part of the optomechanical assembly. A third camera attached to the assembly permits the end user to precisely position the fly under the objective of the microscope for two photon calcium imaging, using GCaMP as the reporter. A novel, high-resolution projection system, designed and developed by the Juusola group was attached to the optomechanical assembly and could be precisely positioned to lie within the visual field of the fruit fly.

In collaboration with Professor Mikko Juusola, the Custom Microscopy Design team at Cairn Research built a bespoke optomechanical module to expand the functionality of a multiphoton system, enabling members of the Juusola group to monitor both the brain activity of a fruit fly and its walking behaviour in response to visual stimuli. Although this system is used primarily with fruit flies, it could easily be adapted for numerous other insect model systems, including ants, bees, beetles and blowflies. In addition, the adaptive design of the module could also permit behavioural responses to other sensory stimuli (e.g. olfactory and auditory stimulation) to be monitored. 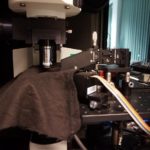 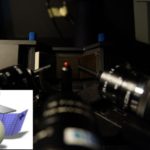 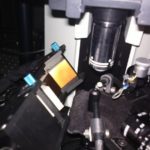 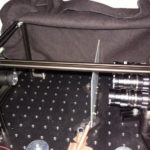 Since 2004, I have worked with Cairn and relied on their expertise on many neuroscience projects. It was a real pleasure to work together with Jeremy Graham, Tom Parrado and the Cairn team in custom-designing and putting together the Drosophila trackball system with panoramic high-resolution optical virtual reality displays for our two-photon calcium imaging system. This bespoke system has since provided us with crucial high-resolution dynamic data about how the fly vision and behaviours are adapted to see the world in "super-resolution" stereo that we hope to publish soon