Well, after three previous episodes, we thought we’d exhausted all the possibilities for our “Cairnland” spoof, but as reality continues to trump satire, here we are again in a vain effort to catch up! For those of you who had forgotten, or who were fortunate enough not to have known in the first place, the Cairnland storyline is that our 70 acre farm has seceded from the UK in order to remain in the EU. By now we thought we would be pretty much done with it, but the continuing idiocy of the whole “Brexit” thing, not to mention of government in general, has given us plenty of new material, so here goes! 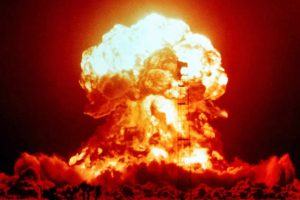 ll switch around that you can read about here, in which the all-important title of “President”, has been abolished, so Cairnland now has no formal leader! The previous occupant of that post now merely wishes to call himself “Chairman”, and nobody else wanted to claim it, as we felt that there is now room in this world for only ONE President, namely the President to end ALL Presidents, and perhaps literally so if people over there have been sufficiently unwise as to give him the right nuclear codes. The UK government may be prevaricating over whether to keep their promise of a state visit for him, but subject to a successful outcome of Cairnland’s EU negotiations, it is our every intention to invite him here for one of our own as soon as we can.

More about that in a minute…

But first, just how are those negotiations going? On the whole they are moving forward pretty well, with really just one matter to sort out now. Those of you who have read our previous Cairnland reports will know that our nevertheless forward-looking little nation has been dogged by continuing malicious rumours that cannibalism is rife here, which we think is particularly unfair as the problem has been relatively well under control for some time now. As one of the conditions for our accession, the EU had been demanding that it should cease altogether, but it now appears that a compromise can be reached, involving just the occasional sacrifice for ceremonial purposes only, and we think we can live with that, even though the sacrifices wouldn’t of course.

This particular practice is likely to primarily affect the UK rather than Cairnland in future though, as they need to import half their food, much of it from the EU, whereas  we have our own farm to sustain us. Once Brexit goes ahead, the British may well therefore have to start devouring each other so that at least some of them can survive, which in theory should stabilise the population at about half its current number. However, once people get the taste for this food source, without strong self-discipline it can be quite hard to stop, so the population may end up devouring itself completely.  We could then end up with the UK being repopulated by a wave of EU immigrants, as there would no longer be any indigenous population to complain about it, which would be ironic indeed. Still, the previous inhabitants voted for it – or some of them did, anyway.

Once the EU n

egotiations are complete, then we can go ahead with that state visit! The highpoint will be a sumptuous banquet, in which our illustrious guest of honour will not be at the head, but instead at the very centre of the table, in a (for him) surprise culinary extravaganza specially prepared for the occasion by the internationally renowned chef Dr Hannibal Lecter. Although Cairnland is a relatively new member of the world community, many of its dignitaries are already accepting our invitations to this event, often, it must be said, with considerable alacrity. We should have quite a turnout on the day!

But the UK seems to be struggling,

In respect of events other than Brexit right now though, which we find a bit strange as one such is now becoming one of Cairnland’s biggest money spinners. We refer of course to the awarding of government contracts to private companies. One would have thought that with the government footing the bills, it would require a rather special form of “competence” to screw things up, but one such company, Carillion, has just gone broke after issuing several profit warnings, and another, Capita, is now at the profit warning stage. Yet Cairnland is doing fine here, so why the difference? Well, it all comes down to the contracts! Ours are written in our own language of Cairnish, which if you remember from our earlier reports is a still further debased form of the local Kentish dialect, having regressed to a form where most words consist of just four letters. In legal terms this very limited vocabulary makes the contracts particularly imprecise, which means that neither side is at all clear about what was actually agreed to. This in turn means that it is basically impossible for us to be sued for breach of contract, which in turn means that there is no actual need to do the work at all.

Of course, the UK government does get a bit upset about it all from time to time, so we counter this by regularly issuing “prophet warnings”, in which our religious seers threaten all kinds of pestilence if the supply of contracts were ever to dry up. These threats have included the usual outbreaks of boils, plagues of locusts and mass halitosis, but nowadays we find the simple threat of British weather just carrying on as usual to be a particularly effective one.

But now we are ready for even bigger things!

There has been recent talk once again of a bridge being built across the English Channel, which we find puzzling since if the UK leaves the EU, nobody would need to use it. Instead that has given us our own Big Idea, which is indeed to build a bridge, but to take it all the way to China! Needless to say, experts say that just can’t be done, but since at least some sectors of the UK government are now becoming famous for disbelieving expert advice, we reckon this one’s in the bag. And thanks to the ambiguities of the Cairnish language, we could just trouser the money as usual, instead of causing the embarrassment of proving the experts right after all, which would never do of course. Everybody wins, but especially us!

Finally (for this time at least), we return to Brexit, for which we have an important suggestion.  This concerns the serious issue of land borders between the UK and the EU. Not only is there going to be one between Northern Ireland and the Irish Republic, but there will also be one between Cairnland and the UK, so this directly affects us. In as much as anyone can understand the current position of the British government, it seems to be that these borders should be invisible on the ground, while avoiding any form of contact across them. If that continues to be their position, the best compromise would appear to be a glass wall, and naturally Cairnland would be delighted to bid for these contracts. And since we could in practice guarantee that we wouldn’t actually get around to building either wall, then once again everyone wins, again especially us! That at least would make some sense….