Our support for the new larger camera sensors, and the larger fields of view offered by the latest microscopes, for which we have already just introduced the 32mm version of our Optospin filter wheel, is now further extended by the introduction of a “32mm” version of our adjustable rectangular diaphragm.  Fully closable like both its predecessors, it opens up all the way to a 23x23mm square opening, which actually works out to be a shade (not that this design will give you any of that!) over a 32.5mm diagonal.  It generously improves on the 16x16mm opening of our current design, which will continue to be available as that is still plenty for many applications, and which itself was a further development of the original 10x10mm design that we introduced way back in the now far-distant days of the 1990s.  But this latest “Cairnavision” version is now very nicely matched to the 29.4mm sensor of the Photometrics Kinetix sCMOS camera and the 32mm sensor of the Andor Sona 4.2B-11 sCMOS camera, to name a couple of leading examples of this trend.  Its modular design allows a variety couplings to be fitted, so please just ask for further details.  And as our tongue-in-cheek name for this latest version suggests, it can (albeit just like its predecessors) indeed set rectangular apertures rather than merely square ones, allowing you to view your precious samples in widescreen mode if you so wish! 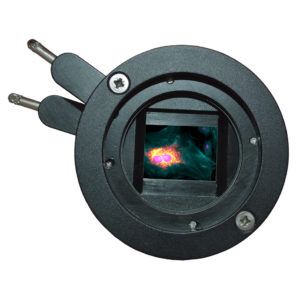 So we have been making these things for quite a while now.  When we designed that original version, we thought we had done pretty well to fit the mechanism into an assembly of just 60mm diameter, but as those camera sensors started to grow, 10x10mm was no longer always sufficient.  In 2008 we therefore introduced the current 16x16mm design, and at the time we thought we were doing pretty well to cram the larger mechanism into that same 60mm diameter housing.  This sort of size is very handy for incorporating into optical coupling tubes, for example, but clearly there is no way that such a significant further opening increase up to 23x23mm can be accommodated into that sort of overall diameter.

This became a challenge!  The secret was for the design process to allow for the housing diameter to perhaps be rather more than 60mm, and/or for the opening to be perhaps rather less than 23x23mm, in order to achieve the best possible compromise.  Once we had a working mechanism (which operates by our established principle of rotating levers to open and close each pair of blades, thereby offering rectangular apertures as well as square ones), it was then a question of repeatedly shaving a bit off the housing diameter, or squeezing in just a bit more opening, until we eventually managed to meet this apparently crazy 60mm specification.

Of course we had to employ a number of design “tricks” in order to achieve this, but if you want to know what they are, then you’ll just have to buy one and take it apart for yourself!  Or why not just buy one?  The first batch is available now.