It Looks Like the Crops Have Managed to Avoid Catching Covid! 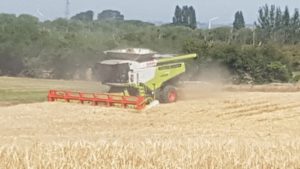 The farm has always been a great location for our little enterprise, but it is proving even more so in these current crazy times!  Those of us who neither want to go out in our thousands to ludicrously overcrowded beaches, or to cower under the bedclothes waiting for the nightmare to end, but instead just want to “get on with things” could do a lot worse than being in an agrarian environment.  Farm life just goes on, with both crops and weeds growing splendidly, so why don’t we?

Why indeed!  But of course things haven’t remained entirely normal, as we were quite taken aback by the extent to which universities in particular have had to put up the shutters in recent months.  For example, one of our academic collaborators was only able to enter his premises on the pretext that he needed to prevent the lasers on his microscope from exploding, and although we admire his ingenuity, there is clearly a limit to how far such an approach can take you.  So, we furloughed many of our customer-related personnel, pending the removal of those shutters, but the situation does seem to be easing now, with the orders now flowing in nicely once again.

And as our people return, we are also helped by the fact that our premises are of a nicely generous size (and lacking a massive multistorey hole in the middle), with many of us having our own offices, so maintaining “social distancing” here is no problem. Meanwhile, those of us who have primarily been working on the product development side have taken full advantage of the relative peace and quiet, and have increased their efforts accordingly. The fruits of their labours will form a story or two for another time, but meanwhile let’s just say that we’ll have some exciting announcements to make over the coming weeks!

But meanwhile, back to the farm, where we’ve just had another good harvest.  It was “spring barley” this year, where “spring” refers to the season of planting of course, rather than the mechanical properties of the barley itself.  The land is farmed for us, and for which we are in the very capable hands of Dominic Hughes, who tells us that at around eight tons per hectare it was an above average yield for this crop.  That’s good to know, as difficult growing conditions earlier in the year have knocked back wheat yields generally this time.  Normally the farm alternates between “winter wheat” and oilseed rape, so barley has been a bit of a break from that pattern.

So actually we’re all in pretty good shape here, and hence we can think of a good use for at least some of that barley….

Gallery of our August 2020 harvest