The truth behind why we're heading for a no-deal Brexit

THE TRUTH BEHIND WHY WE’RE HEADING FOR A NO-DEAL BREXIT
We first advanced this as a tongue-in-cheek theory in a blog in 2016, but as time has gone on, and especially now that the risk of leaving the EU without any deal at all seems to be very high, we are increasingly wondering if we were actually right all along.  So here, once again, is what we suspect may have happened. It’s all down to Oxford University’s Bullingdon Club, of which both our present prime minister and the last prime minister but one were members.  Historically the Club’s activities included dining at expensive restaurants, and then trashing them, and then maybe smashing up a university building or two for good measure.   In view of the damage that a no-deal Brexit would cause, we therefore cannot help but wonder whether the more recent members of this sorry institution have become rather more ambitious in that direction, and hence have decided to seek a bigger target to destroy. 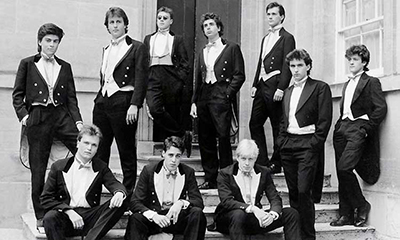 Here therefore, is a repeat of the dramatisation of what we fear might have happened at an Oxford restaurant one evening a quarter century or so ago….

“Ok lads, before we begin, whose Daddy’s turn is it to pay for the damage this time?”
“Mine, I think, so let’s get started! Waiter, which is your most expensive wine?”
“That will be the SoixanteNeuf du Pape 1937, Sir.”
“That will do excellently. Bring us six bottles immediately!”
“Here you are Sir! Allow me to open them to let them breathe.”
“No need for that, my good man!”
SMASH! SMASH!! SMASH!!! SMASH!!!! SMASH!!!!! SMASH!!!!!!
“Haw haw haw!!! Out they all go! Straight through the plate glass windows!”
“That’s the spirit, boys! Just like the old days!”
“Well no, I don’t think it is, actually! I mean, this is nothing compared with what our predecessors did to the Peckwater Quad a couple of times. Our standards are slipping, so it’s high time we raised our game here. Has anyone got any ideas?”
“Yes, by Jove! I think I have. There’s no need to stop at wrecking just restaurants and colleges! Why don’t we trash the ENTIRE COUNTRY?”
“Fantastic wheeze, old bean, but HOW?”
“Hmm, well I guess we’d need to run it for a while. Should be easy enough to get into Parliament with our connections, then we just work our way up until we’re in charge.”
“Gosh, that’s an absolute corker of a notion! But what would we do then, and wouldn’t people realise what we were up to and stop us?”
“Not if we’re tricking other people to do the damage for us! Suppose we hold a referendum on something that would turn the country into a basket case if the result goes the wrong way, and make such a bad fist of organising it that that’s exactly what happens!”
“I like it! How about one on getting out of Europe? Nobody understands how important it is to us, and our mates in the press can help things along by forever banging on about bloody foreigners stealing people’s jobs!”
“Perfect! And if one of us is Chancellor we could make sure that the plebs are sufficiently impoverished to ensure their resentment. They’d be voting to come out in droves!”
“Oh the poor fools, they’d fall for it hook, line and sinker! What a jolly jape this will be!”
“Top-hole! But the Club tradition is that our Daddies must pay for the damage, and this one could be quite expensive.”

“No, that’s the beauty of it!!! We could ensure that they all keep their money offshore, so when Sterling crashes we’ll ALL be making a killing. We’ll end up owning EVERYTHING when they pay!”
“Yes…., but maybe then it wouldn’t be worth owning?”
“WHO SAID THAT??? We don’t want YOUR sort in this club, you miserable little creep. Out you go!!!”
CRASH!!!!
“Haw haw, another window gone! Right, now for the crockery!”
BREXIT!!!!!!!!!!

Cairn will get through this somehow (we’re thinking about smuggling to avoid the meltdown at our ports), so the message to our EU customers in particular is to please stick with us during these crazy times!