By 27th June 2019Cairn News, News, Uncategorised
“Oh no!”, said Martin our Chairman the other day, “Not ANOTHER shoebox stuffed with LEDs and with a light guide dangling out of one end!”, this being the third such product that he’d seen in as many weeks.  Well, at least the boxes were in different colours!  This particular sighting was at the Laser Photonics show in Munich, where some discussions concerning LEDs were in fact the primary reason for Martin’s visit.  However, Cairn has no plans to tread that particular path, as we have something much more interesting up our sleeves.  As to what it is though, well, you will just have to wait and see, but let’s just say that we’re all very excited about it!  But the show also gave us the opportunity to see our friends Chroma and 89North again, as they also had a stand there.  They had 89North’s LDI multilaser source 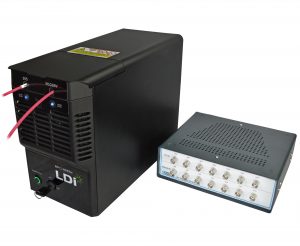 on display, which we think is well worth the extra money if LEDs aren’t going to be bright enough for you – and perhaps even if they are.  To be fair though, we don’t want to denigrate that multiLED approach, it’s just that the market is sufficiently crowded that we are rather relieved not to have our own offering.  Instead, if you want to buy such a system from Cairn, we’ll happily supply whichever of those no doubt fine products you prefer, while we meanwhile further develop our own ideas.
It was good to be in Munich once again, but the European late June heatwave was perhaps not the best time to be there, although at least the exhibition halls were nicely air conditioned.  Martin had also hoped to have the opportunity to try out a little more of his albeit rudimentary German, but whichever group he was in, there was always at least one person present who couldn’t speak that wonderful but nevertheless rather fussy language.  So English it mostly was, but at least that saved Martin the embarrassment of getting his genders and word endings wrong all the time, no doubt to the very great relief of the native speakers!  German beer tastes great in any language though.  And their politicians haven’t all gone barking mad….